I finally finished my first knook project!  I made a hat. 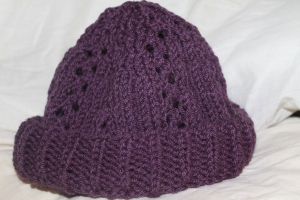 In case you’re wondering what a knook is… see my previous post with my knook review.

It does take some time to get used to using the knook, it was slow going at the first.  However, once I got used to it, I could speed up a bit, and I think it turned out quite nicely in the end.  Here’s a close shot of the lacing in the hat:

The pattern came from a book by Leisure Arts, called Urban Hats for the Knook.  I’m looking forward to trying some of the more complicated patterns, and maybe trying to make up some of my own!

What is a knook?  You may be asking.  It’s basically a crochet hook with a hole in the end for a thread to run through.  It’s called a ‘knook’ because you can knit with a crochet hook.  I finally picked it up this weekend, and tried making a hat.  After two hours, this is how far I got:

That’s about an inch.  It’s been very slow going.  Definitely slower than if I had knit the hat, or even if I decided to crochet.  Here’s what it looks like up close:

You actually are making knit and purl stitches.  And I must say, it is kind of neat having the string attached at the end.  I was following a k2 p1 pattern, and I realized that about 20 stitches ago, I added a purl stitch.  With knitting needles, you have to carefully pick up your stitches again, however, with this, you just rip them out, and they stay on the cord.  Sweet!

I’m making one of the hats from this book: 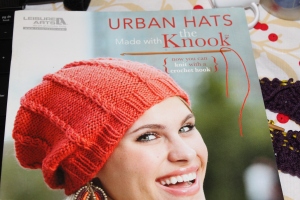 Hopefully, I finish it within the week, and will be able to show you some pictures of it…